A translated version of this post in German can be found here.

The road in front of me is desolate. What was once a beautiful city filled with people has become a desert. We are on a supply run when I hear the screams of a little girl at the end of the road. I tell myself she has no choice but to be devoured by the hungry mass that begins closing in on her. Through my rifle I see her face yelling out for somebody to help her. Any other day I would run to her rescue, but today all I can do is put her out of her misery. I am hesitant, but I know she will continue dragging the crowd to her. I think about the people back at the Motel I am doing this for. The thought of another little girl I have taken into my protection distracts me from the screams as I fill my backpack with supplies from the drugstore. I ignore what I just did, who she was, why she was alone, whether she had a family or friends or where they are now, for now all I think is that at least her sacrifice might have saved another life. 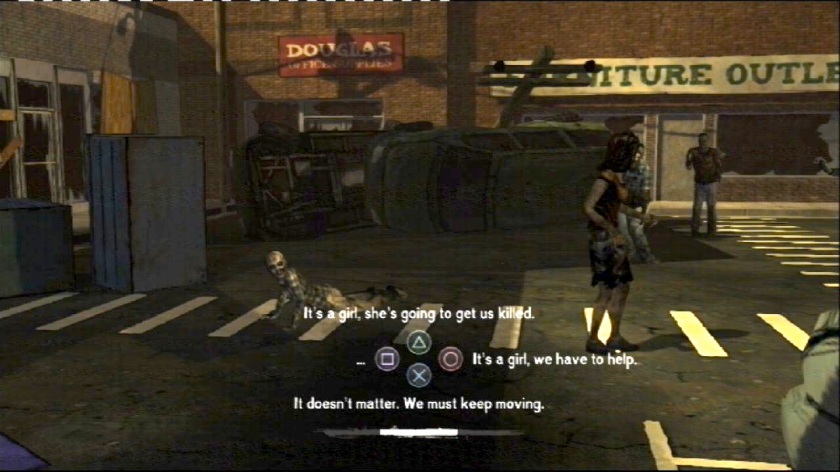 This is the world of The Walking Dead, probably the most intriguing zombie apocalypse game in recent memory. Adopting a defenseless girl, actually caring for her and the people who were affected by the apocalypse, and engaging in believable relationships with the group aren’t typically things we do in Dead Rising, Resident Evil, Left 4 Dead, or all the other zombie games.

But why will this go down as one of those special games, that truly advanced the medium? Why is this precisely not just a very good point and click adventure game? Why is it that I find myself actually feeling attached to not only the protagonist, but also emphasizing with the people I hate, and what is it that makes all these actions in the game so intense and gripping?

Each of the five episodes is split up into individual segments, that allow for quick and easy access from the main menu, and the length of the entire campaign takes up around eight to ten hours. It should be noted however, that letting a week go by between each chapter contributes in letting the story sink in, especially since every episode differs so much in terms of style and tone. The first episode serves to introduce main protagonist, convicted murderer, and former history professor Lee Everett, whose ride to prison gets cut short by the zombie outbreak.

Sentiment and believability are two key elements that serve to create an attachment to Lee and the adoptive child Clementine. We know Lee is a killer, but his interactions with Clementine are at no point nothing but sincere or caring. A scene that could have played out as all together boring where you wrap a band aid around her finger can be described as one of the focal points between the two. This is not an escort mission, Clementine is not Yorda from Ico or any other annoying NPC, she never gets in the way and shows herself to be more resourceful and helpful than several other characters throughout the entire narrative.

More importantly, characters are not defined by their family status or social rank. Father and husband Kenny of course states how he wants to protect his wife and son, but this is just one aspect of something Telltale inscribes to each of these characters, namely a personality, that is believable and complex.

Episode two focuses on the group’s struggle with starvation and supplies. The player is then early on given the decision of choosing the rations for each person. Naturally, my instinct went with feeding the children first, but then I had to think about who was going to suffer from that decision. These choices do not come easy and a dialog box at the top left corner serves to mark every consequence with characters remembering what you did and what people think of you. 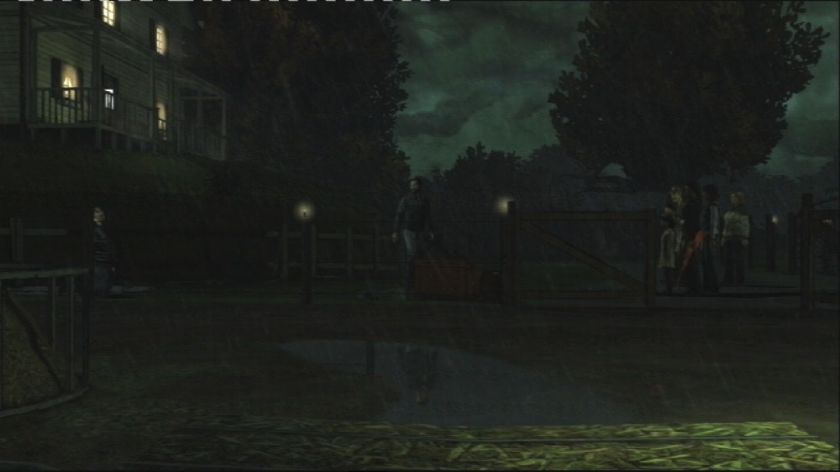 Episode three focuses on the group being forced to move on from their previous “home” and places the story on finding a train, whereas the penultimate episode revolves around bigger themes. If anything, it shows how The Walking Dead does not cop out at any time or tries to pretend being something it is not. The people from your group are by and large interesting, easy to adore, and many will die. What first seems like naïve and innocent little survival boils down to a realistic look towards the apocalypse despite the comic book art style. 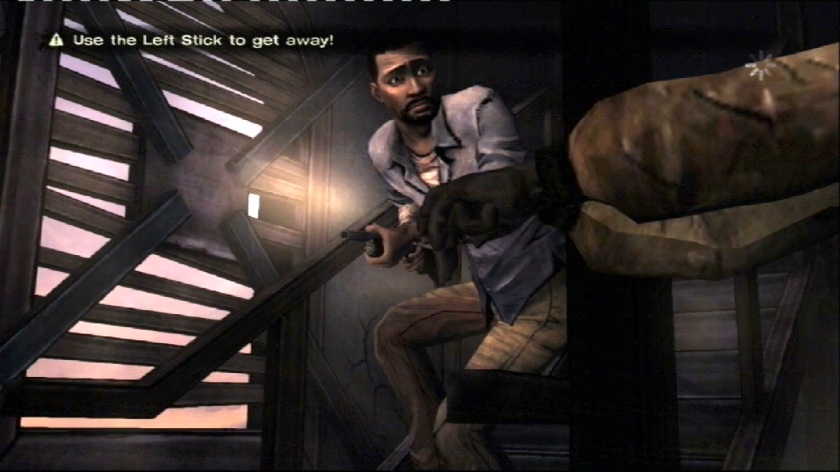 Episode four introduces the town of Crawford and it’s leader who decided to brutally murder children, elderly, and the sick. The survival of the strongest however proves to be a false hope when faced with the question of what’s the point of living when you are so pragmatic, you do not even care for the life of the people closest to you for fear of them slowing you down.

Your own group will feature such people, and you will be put in the spot to choose who lives and who dies, and only after I made that choice I found myself realizing what I did. But I still did not regret it, because I always told myself that no matter what I did, I always did it to protect someone else. That’s also the same reasoning the people from Crawford went with and THAT realization was what ultimately made this series so stunning.

This game makes you think and feel, it is a rather slow and methodical experience, but it is always engaging and gripping, and most importantly exciting. Few moments were hindered by poor design choices, lag, glitches or other bugs, but none of them were ever ruined by technical issues.

The last episode is also the shortest, but by no means does that undermine its value. Depending on who Lee took with him in his last decision, there are more than a hand full of different ways to start the finale, and even though some choices ultimately reveal themselves to have merely been the illusion of choice, the writing is to concise and utterly excellent, that I never felt cheated by that aspect.

While Adventure Games of the past are today still remembered for their story telling, they are also remembered for their less than engaging gameplay mechanics that consisted of collecting items and fighting the puzzle designer’s logic. The Walking Dead features instances of rather obscure puzzle logic and at times that does slow down the pacing, but later episodes start relying on story telling and decisions rather than puzzle solving.

If anything, the conversations themselves are the real puzzles. Each of the four face buttons is connected to a line of dialog that very clearly illustrates your actions for the most part. What makes them so excellent is not only the writing, but the sincere performances by all of the actors. 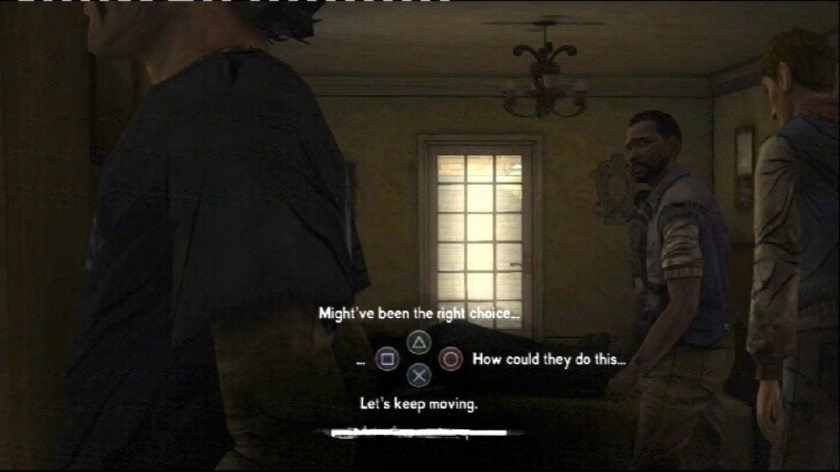 Decisions are hard to make, because they never fall into that binary system of good and evil. A real moral choice has to be a dilemma, where your moral viewpoint dictates how you want to act. There will always be a certain kind of Lee Everett, but the variety of options to choose from lives from individual details.

This is why it is not enough to just watch all the episodes online or focus on cutscenes. Whereas a game like Heavy Rain reduces the player to a gratuitous remote control or the annoying voice that ruins an already convoluted narrative, The Walking Dead respects the player, while delivering an utterly sincere experience.

This isn’t to say that the game is completely depressive and morose, there are subtle jokes to be had, small moments of nostalgia for the lives before the apocalypse, but even then these create the sensation that Clementine has to forever live in this new world without all the things Lee could take for granted. The living dead are just the icing on the cake, that consists of people and relationships. This is no soap opera, or a melodrama, it does not pretend to be something other than a close look at the true way people behave when all society breaks apart and we fend for ourselves.

When I decided to play the game again I went so far to think about not saving a certain character, not because they turned out to be unlikeable, but precisely the opposite. I wanted to spare somebody from all the awful things they were about to witness, and the final episode serves as a way for the player and Lee to expiate and face the bill for all the actions from all the previous episodes.

It is intense, violent, smart, emotional, riveting, honest, sincere, and most of all atmospheric. This is the type of game we could have only wished for five years ago when this generation of consoles was still relatively new and the indie market was slowly finding its place. Characters all have their own stories, they have reasons for their actions, and they sometimes collide in dramatic outcomes. 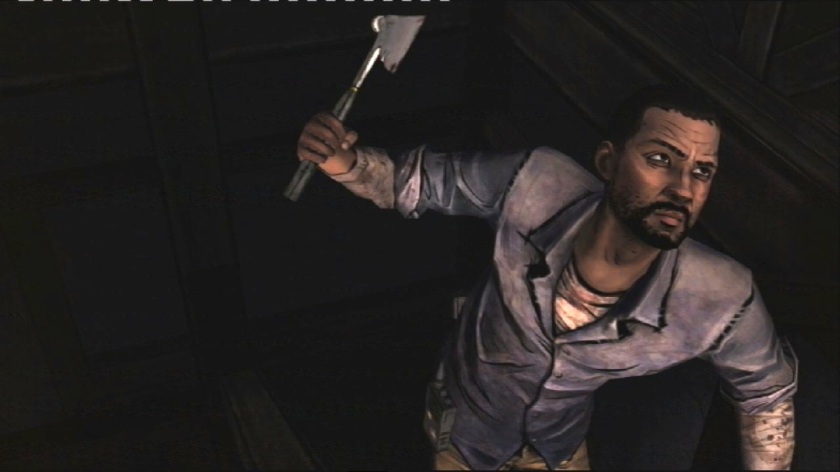 When I saw the credit screen and was faced with that long moment of silence, I had to pour myself a drink and just sit there to recap what just happened. With its strong emphasize on story telling and personal involvement this is without a single doubt a game that needs to be played.

It succeeds in departments where other games fail, maybe because they are restricted by their technological superiority to focus on challenging and gratifying gameplay while removing the focus from story telling and narrative player involvement.

With The Walking Dead Telltale has created something that relies on things we typically only find in smaller budget games, where risks can get taken fairly easily and you can create a drama that does not feel forced or unmotivated, but human and genuine.

Ultimately, the overall experience often left me clueless, it left me on the edge of my seat, it created moments that can and most likely will be discussed for years to come and despite technical flaws, the way it integrated the player’s agency in an otherwise fairly predetermined story is just one of of many aspects that made this series so good.

Looking for the perfect Deadpool, Batman, or Spider-Man doll

Learn how to sculpt and paint toys yourself